I captured some great shots and footage from The Bridge and Spring I Graduation over the weekend. Status of posting them is pending. ():)

I took some of these photos with the DazzlerCam by way of the iPhone and thought I'd share. Graduation yesterday was an AMAZING experience! So proud of all the students who performed yesterday! I truly love to see the growth of the student's from week 1 to graduation. All the practice i seen a lot of you doing these last weeks really paid off. I could tell you were all having fun. And for most of you I know it was the first time performing in front of a large group not to mention in front of family and friends. This is only the beginning dont stop now!!!! I would also like to thank… Continue

STAFF Graduation and The Bridge photos

Hey all-
If you have any photos or videos from Spring Graduation or The Bridge April- please feel free to post them up here! If that's too much work, we can post them for you too- just bring them into REHAB and we'll take care of it!
Thanks guys and congrats to all of the grads!! Proud of all of you guys!!
Big thanks to the 152 classes for pulling everything together for graduation and being so professional and so on…
Continue

As you all may now know, Keith Elam--better known as Guru (Gifted Unlimited Rhymes Universal) of the hip-hop duo Gang Starr passed away earlier this week. Here is a unique opportunity for you to get involved and pay tribute to the late artist.

Particularly seeking out DJs, you can send in a mix featuring song selections from Gang Starr. The best mix will be featured in an upcoming tribute on… Continue

This year’s Record Store Day might be the biggest yet. Last year, our writers would call for info and whoever answered would have no idea what we were asking about—“Uh, yes, this is a record store?” But this year, retailers are ready to push rare, exclusive, classic and just-plain-strange vinyl—last year gave the world the… 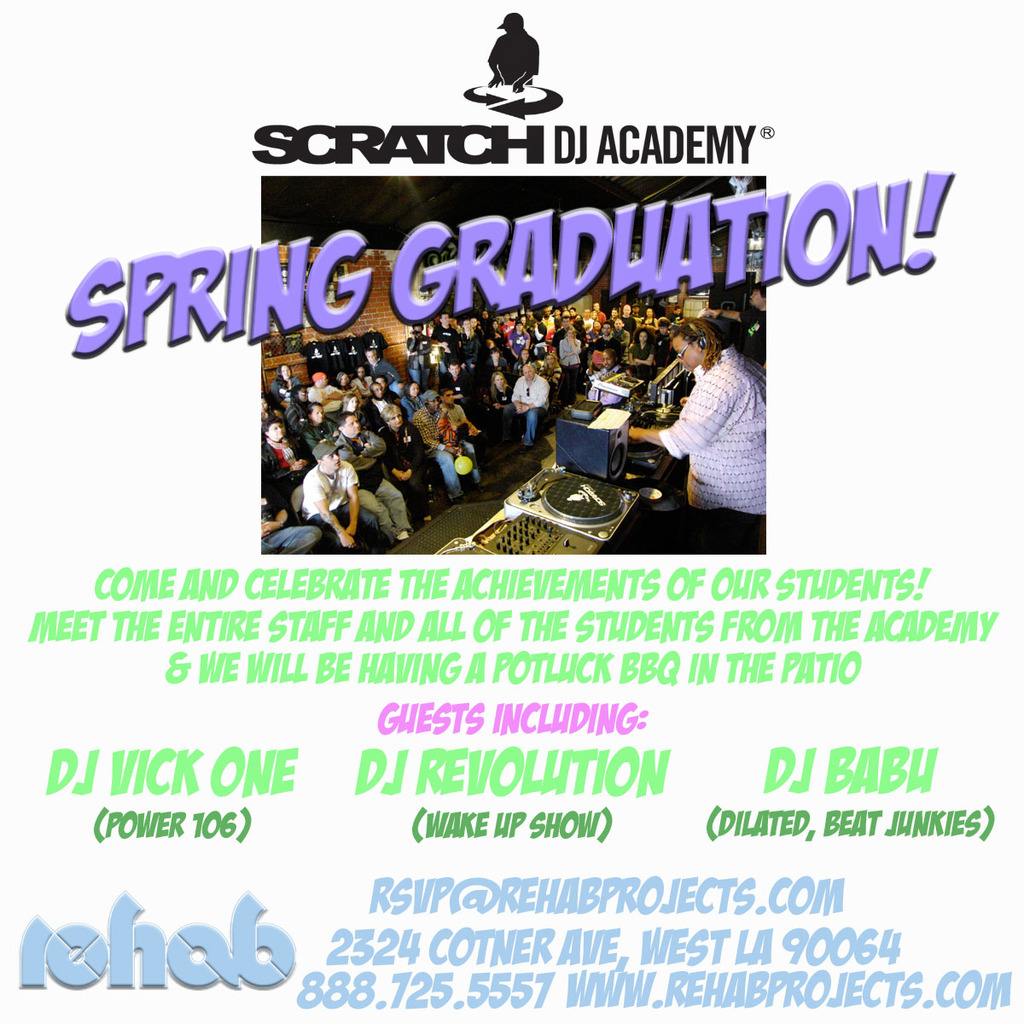 I have posted this up here for anyone to download and send out to their friends and family....

This should be a GREAT graduation!!…

DubStep...anyone else feelin the BASS?!

It seems like Dubstep and its scene are making a bigger and bigger impact everyday. My question to the forum is if there are any of you who are equally interested in this underground genre as much as me? Are there any of you who are spinning these Dubs and wishing there were other like-minded DJ's who'd be willing to start/join a crew??

http://thenaturalmovement.bandcamp.com/
Check Out thiz Album.. They're an underground crew from back home (Bakersfield), the dj (Dj Kwiz) use to be my coach. It has a real chill and upbeat feel to it. Go ahead and download, itz free!

STAFF Something for you...

I'll Get You - Gigamesh Remix.mp3
Hey guys-
Just posted this song and wanted to put up this version to share with yall...
Probably one of my favorite tracks out right now...
ENJOY!
*a little something to hold you over until The Bridge with myself, Choc, and Neil Armstrong on the 24th!!…
Continue

Time is flying by and we are already in week five of this semester. Keep in mind this semester's graduation is APRIL 25th @ 1PM. Make sure you are signing up on the potluck list in the studio for the items you are going to bring so we can make sure everyone gets something to snack on. We have two special guests DJ Babu and DJ Vick One that will be stopping by to show their support.

STAFF The friendly skies not so friendly... to your wallet!

Completely thought of you travel enthusiasts and DJs who travel all over the country/world by way of the friendly skies. Well, they're not so friendly to your wallet these days....

Don't know if you heard, but some major airlines are considering on charging you if you plan on bringing on board a carry-on bag! This consists of luggage that fits in an overhead cabin. From what I understand, if your bag fits under your seat, you won't be charged.

Any software engineers out there that want to work at myspace? e-mail me jessie.nash@fox.com with your resume!